WARNING!!! Many featues on this website require javascript which is currently disabled in your browser 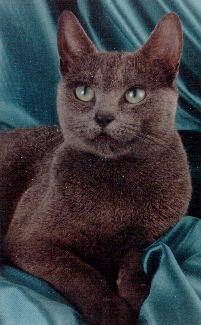 The Russian Blue (breed number 16a) is a short haired, robust variety with many theories of its origins. The most popular theory is that the breed originated in the northern areas of Russia. It's woolly undercoat and second longer coat seems to suggest that it does indeed hale from colder climates. Some stories see the cat being taken from Archangelsk (Russia) to Sweden and Norway and then onto Britain or directly back from Russia by visiting seaman.

The current breed structure has a lot to do with the introduction of siamese genes when the breed fell on hard times when there were few pure breeds around. During World War II the Russian Blue nearly disappeared altogether in Europe. In the UK only one breeder 'Marie Rochford' managed to keep the line going, and it was from her stock that the post war development of the breed began. 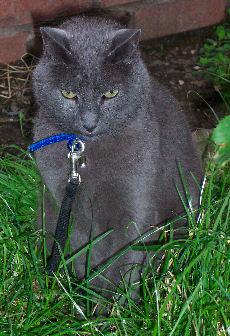 In Russia it was customary to bestow gifts on newborn royal babies to ensure a long, happy and fruitful life, by laying a small basket situated at the foot of the cradle containing a beautiful sleeping blue cat. There is a tradition that Queen Victoria and Prince Albert owned Russian Blue cats but unfortunately no-one has been able to substantiate this story. However around 1860 an English diplomat received one as a gift from the Tsar, these cats were reported to be favourites of the Russian aristocracy, such a gift would have been an honour.

Russian Blues have a fine and fearless spirit and most definitely loyal hearts, they adore their owners and make fine companions. As for beauty and grace, they are almost matchless. They have lush coats which feel like velvet and shine like pure silk, eyes like the most beautiful emeralds you have ever seen. Russians adapt very well to other pets in the household and are particulary good with children (although they do not like too much noise) making them the most adorable lap cat. Never underestimate a Russian Blue, they are one of the most intelligent cat breeds and are excellent hunters. They also can be easily trained with small tasks, making them the most superior breed of the feline kingdom.

A beautiful creature
As I have ever seen
Her blue silver coat
Has a silvery sheen
Eyes dreamily emerald
Oh what a lovely green!

Her dainty legs
So svelte and slender
As she sits
So serene
Yet so elegantly
We admire her splendour
With all her qualities
And the colour of her eyes
That sparkle so mysteriously
She holds us mesmerised.

As a name I have chosen Tsarina
A queen for the throne
Of which we are honoured
She chose ours as a home.
A history so regal
A past untold
From a country so tragic
So far and so cold.

Maybe thats why her coat
Is so plush
Yet so blue
As for her breed
Her colour must be true.
To admire our girl
She must be seen
Oh! we love her so
Our beautiful Russian Queen.